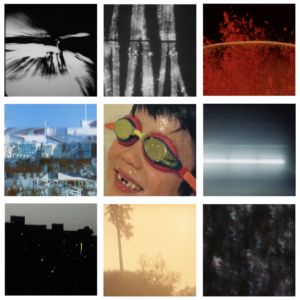 We are very happy to welcome Lucas Haynes from Artist Film Workshop in Australia with a lot of film prints!

Initiated by filmmakers Richard Tuohy and Dianna Barrie, Melbourne’s Artist Film Workshop (AFW) began as a series of workshops and film-only screenings in 2011. After 18 months, a lab space was inaugurated in 2012 with more than 20 founding members, who constructed a wet lab, dry dark room, common space and screening room. The lab is furnished with cameras, projectors, printers and editing equipment. In addition to these facilities, AFW runs a regular program of public screenings and workshops with a strong emphasis on teaching and learning. AFW operates as a central hub for individual and collaborative film activity, with all decisions made and financed by lab members.
http://www.artistfilmworkshop.org/ 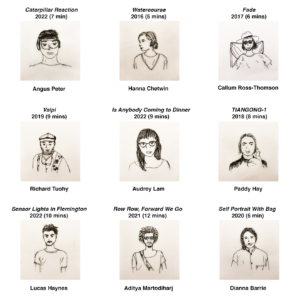 Details to the program:

Paddy Hay and Louis Marlo, TIANGONG-1, 2018 (8 mins, Super 8 > 16mm Blow-up)TIANGONG-1 is the name of the Chinese Space Station that crashed to earth on 2April, 2018.Paddy Hay is a filmmaker whose work encompasses experimental, narrative anddocumentary styles. His approach to filmmaking is embedded in small gauge film,and underpinned by a DIY approach to storytelling and cinematic ideas. He haspresented his films at major film festivals and film institutions including theInternationale Kurzfilmtage Oberhausen, The Austrian Film Museum, MelbourneInternational Film Festival, and The Australian Centre for the Moving Image.Louis Marlo is a Melbourne-based Composer, Sound artist and the owner of FeltSense Records. His work revolves around the marriage of processed basedelectronics, hand cut tape manipulations and a sonic response to the moving image.

Richard Tuohy, Valpi, 2019 (9 mins, 16mm)The Chilean city of Valparaíso is nestled among hills, overseeing the Pacific Ocean,in the vicinity of active volcanoes and perilously close to the boundary between twotectonic plates. Evoking this fault line, Valpi (Tectonics) is horizontally segmented,creating an immersive yet abstracted chronicle of both the multifaceted layers ofhuman life in this place and the politico-cultural fractures hidden beneath the surface.Bio:Staunch advocates for the possibilities of hand made cinema, Tuohy and Barrie havedevoted much time and effort in sharing their knowledge through workshops andclasses. Their films and performances have screened at venues such as MelbourneFilm Festival, EMAF, Rotterdam IFF, New York FF, and Media City and they haverepeatedly toured Europe, the Americas and Asia presenting solo programs.

Audrey Lam , Is Anybody Coming to Dinner, 2022 (9 mins, 16mm)The adventures of Yokitom around the home and across the seasons, with asupporting cast of family and friends.Bio:Audrey Lam studied screen production and photography at Queensland College ofArt. Her films have been screened at many festivals and museums, includingInternational Film Festival Rotterdam, BFI London Film Festival, InternationaleKurzfilmtage Oberhausen, Visions du Réel, the Centre Pompidou and the Asia-Pacific Triennial. Audrey has participated in arts workshops and residencies includingFondazione Antonio Ratti Advanced Course, Locarno Filmmakers Academy andAsialink Arts Residency. She has co-curated film seasons at the National Gallery ofVictoria and Australian Centre for the Moving Image.

Dianna Barrie, Self Portrait With Bag, 2020 (6 min, Super 8 > 16mm Blow up)A camera-less portrait of the artist. Super 8 cartridges placed inside a black cottonbag, the film advanced via a hand crank. The tiny gaps in the fabric weave make fordozens (hundreds? thousands?) of tiny pinholes.Bio:Dianna Barrie (b. 1972, Melbourne) found her way into filmmaking as a middleground between the pursuit of abstract music and philosophy. Ever pushing the limitsof the hand processing of super 8 led to the establishment of nanolab with RichardTuohy, and into the intersection of hand making and industrial cinema technology.This exploration has spread beyond individual work to the establishment of ArtistFilm Workshop, where celluloid is embraced and advocated by a community ofpractitioners in Melbourne. Dianna is a well known figure in the international artistrun film labs scene.

Lucas Haynes, Sensor Lights in Flemington, 2022 (10 mins, 16mm)Lights turn on and off in a building in the distance.Bio:As a small child Lucas used to collect chicken bones off plates at food courts. Hewould then take them home and order them in size before fitting them into Legostructures. Now he makes films about buildings and people.

Aditya H. Martodiharjo(Bandung, Indonesia), mostly bo-ri-ng, Opinion Controller of Kammeretas and KomandoLaboratorium Workshop of Lab Laba-Laba, at the moment he is experiencing the near-artistexperience. Many of his works are produced in a non-linear way, always spontaneous, withlittle objective on how the work will look in a more traditional aesthetic sense. Notepadmethod glitch, Toys generated glitch, Cinema 4d and Processing are some of the tools thathe constantly uses.

Angus PeterAngus likes to walk through the bush sometimes he takes a camera.

Samaan Fieck, Kangaroo Applelives on Gadubanud land, north of the Southern Ocean, surrounded by the Otway Ranges. He is thehost of More Than the Ear Can Hold, a weekly broadcast on Apollo Bay Radio (3abr). He has exhibited /performed throughout Australia, Taiwan, Japan and New Zealand at; The Centre for ContemporaryPhotography, ACMI, Lacking Sound Festival (Taipei), Treasure Hill Artist Village (Taipei), AvantwhateverFestival and CAST gallery (Hobart) among others. Since moving to the Otways he has provided thecomposition and sound design for The Sublime and Remain In Light, in collaboration with These AreThe Projects We Do Together. He is an active member of Red Wine and Sugar, with Mark Groves.