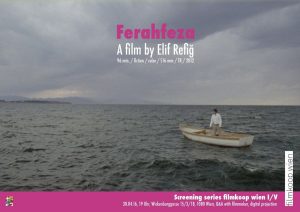 Ferahfeza (Ships) by Filmmaker Elif Refiğ.
There will be a Q&A with director Elif Refiğ after the screening.
30.04.2016, 19 Uhr
filmkoop wien
Wickenburggasse 15/3/1B, 1080 Wien
The filmkoop Vienna started a screening series and invites international artists and filmmakers to present their works to a broader audience in our cinema.
Elif Refiğ: born in Istanbul 1978. Studied film at Bosphorus University and Columbia University in New York.
Film Ships/ Ferahfeza: 96 min. / fiction / color / S16 mm / 2012 (projection: digital)
Trailer: https://www.youtube.com/watch?v=-Av8yb7fJdM
Film Synopsis:
20-year-old Ali works with his strict father Raif and hard-working friend Kismet as a ship supplier for the shipyards and harbors of Tuzla, Istanbul. While constantly watching departing ships, Ali dreams of a better life elsewhere. He slacks off at his job and as he goes through life fulfilling his father’s demands, he keeps looking for the signs that will lead him to a more satisfying life. While trying to see the city from a different angle on the hill where he hangs out with Kismet, Ali gets on top of a tower and notices a ship graffiti on the wall across from him. Ali considers this as an important sign and decides to find the person who made the graffiti. He strongly believes that this person is meant to accompany him on his quest to the far away lands.