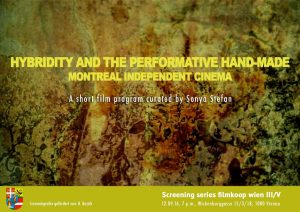 filmkoop wien started a screening series and invites international artists and filmmakers to present their works at filmkoop wien. Each screening is curated by a different member.

Sonya Stefan presents current Montreal filmmakers and video creators who are exploring hybrid techniques and the hand-made. Each artist defines their own unique process, either by hands-on film/video manipulation or via performance-based techniques such as Hamish Fulton-esque walking trajectories shot along a man-made path leading to a lake. Experimental and animation works make up this program.
Monday, 12.09.2016, 7 pm
filmkoop wien
Wickenburggasse 15/3/1B, 1080 Wien

Alisi Telengut /Nutag-Homeland
Animation/Color/Stereo/2016/ 6 min
Oil pastel on one piece of paper, under-camera animation, frame by frame, shot on digital. A non-narrative hand-painted visual poem about diaspora, homeland, and the tragic mass-deportations of the Kalmyk people during WWII.

Phillippe Leonard/[T]
HD/Color/Stereo/2015/12min
Philippe Leonard shot the footage for this remarkable work at Times Square, in New York City, during the hours of artificial illumination. Partly for this reason, it is an oneiric diary, tempted by myth and, at the same time, suffused by a melancholy sense that myth has lost its magical power.

Vitalyi Bulychev & Sonya Mladenova/Lapses of Attention
Super8 /B&W/2015/ 3min
This film was made for the One Take Super8 event; it was shot over the course of four hours. The film documents a meditation session. The participant, and co-director of the film, Sonya Mladenova recorded the audio afterwards in a hypnotic state, attempting to replicate the fleeting thoughts and impressions during her meditation.

Alexandre Larose/brouillard #14
35mm to digital/color/silent/2013/10min
a trajectory that extends from my family’s house into a lake, layered multiple times, in-camera