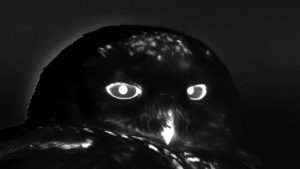 „While trying to put together a short paragraph about my lecture I am listening to a radio feature about the future role of museums in Austria. It shifts my perspective from being part of an audience that watches films professionally to the question of for whom am I curating film programs? Do I care for my audience and how do I care for (and curate and take care of) an audience that has a shifting demographic? How do I care for a temporary community be it this audience or a group of students or a group of people working with analogue film?

Speaking from the point of view of an institution where I don’t have a curatorial position in its traditional sense – which means I don’t collect, archive, preserve, and show films – doesn’t it allow meeven more to focus on this question of the public? Curating radical ho

spitality would be one possible answer to it  …

After watching quite a number of online film festivals in the last year, and the private and public life finally collapsing to the point of exhaustion, the space of the cinema as a social space seems more desirable for me than ever. Yet, programming and curating are still about curiosity, about making visible, and instigating a process of exchange and discussion about the state of the world and our place in it; enduring and endearing. At the same time it is a technique and as such a reflection of my most

private desire to combine the escapist quality of the blackbox with its potential of critical contemplation on the how and why and what.

I cannot not watch moving images, I never could.“