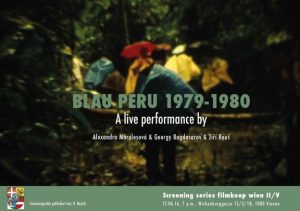 Part II of our screening series!
We invite international artists and filmmakers to present their works at filmkoop wien. Each screening is curated by a different member. For June’s screening filmkoop wien-member Antoinette Zwirchmayr invites Labo Doble (Alexandra Moralesová and Georgy Bagdasarov) & Jiří Rouš from Prague to do a live film-performance at filmkoop wien’s micro-cinema.

We will celebrate film and summer and invite you to come early for drinks at 18.00!
Performance starts: 19.00!

Blau Peru proposes a journey into an exotic and ambiguous world of lost and found amateur films. The examined found footage consists of thirteen 120-meter reels of reversal color film found at the Naschmarkt flea market in Vienna in 2010. We cannot determine whether it is the whole or a fragment of the archive. Two-thirds of the films are „home“ records either from the apartment or from the garden remarkable above all because only very few people appear in them. The remaining third of the archive documents author‘s journey to South America, which in all probability took place at the end of the period of military dictatorship in Peru. Besides exotic plants, animals and people, the author captured his colleagues and certain manifestations of the social atmosphere at that time. This part of the archive is a significant fragment that it is somehow „dislocated“ from the logic of the remaining material. Records from Peru make a substantial part of this found collection. How connects Alpine panorama at sunset with Machu Picchu?